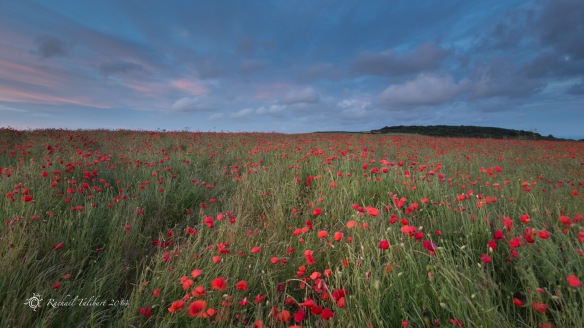 A century ago today, a state of war was declared between the UK and Germany. WW1 would claim 16 million lives in just over four years.  I could hardly resist sharing one more poppy field tonight.

A week ago, I heard via my shooting buddy, Jen that there was a field of wild poppies on the South Downs, about an hour and a half away from here.  The trip was more than rewarded. Perched high up on the South Downs overlooking the Solent, the poppies basked in the evening sun. We stood in that field for more than three hours and it felt like minutes.

We have a few varieties of field poppies in this country.  Poppy fields that spring up on fallow ground tend mostly to comprise the common poppy, papaver rheas.  The prickly poppy, papaver argemone, has smaller flowers and prefers lighter, sandy soils.  The rough poppy, papaver hybridum, is rarer, but its habitat is the chalky soils of the South Downs.  I must confess that I didn’t inspect the individual flowers very closely but looking at my pictures, the poppies we stood among were mostly common poppies.

An individual poppy flower lasts only one day but a single plant can produce as many as 400 flowers.  That’s a lot of poppies.  I would guess ‘our’ field was only about half way through its flowering life – there were plenty of seed heads but also plenty of buds yet to open. 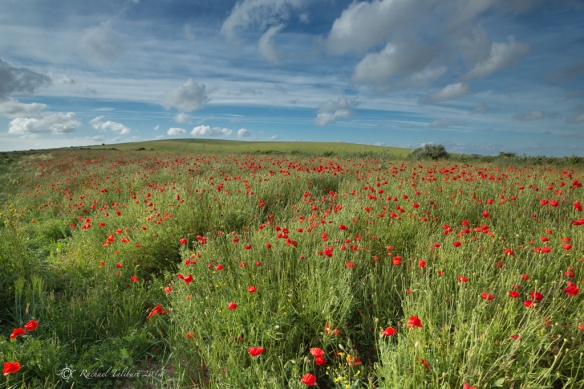 Another name for the common poppy is the corn rose. Ceres, the Roman goddess of corn was depicted wearing a wreath of common poppies. Poppies used to be a common sight in cornfields but selective herbicides and other modern farming practices have made this rarer. They do still pop up on land left fallow, but not in the same place two years running, which keeps landscape photographers on their toes! 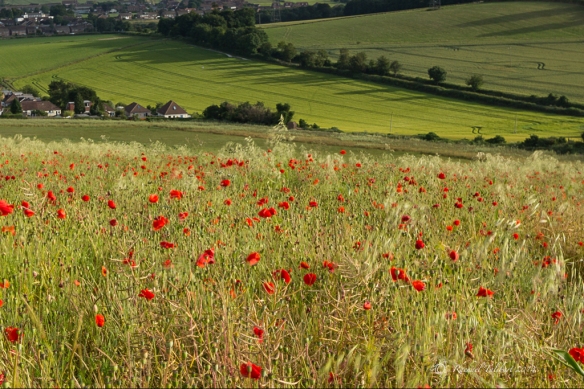 Of course, this year the poppy is very topical, with the WW1 centenary.  These tough little plants, whose seeds needs rough handling to germinate, became the emblem of remembrance because they grew in such abundance on the disturbed soil of the battlefields.  I must confess, however, that standing surrounded by the flowers as they nodded gently in the evening breeze, war and death couldn’t have been further from my mind. 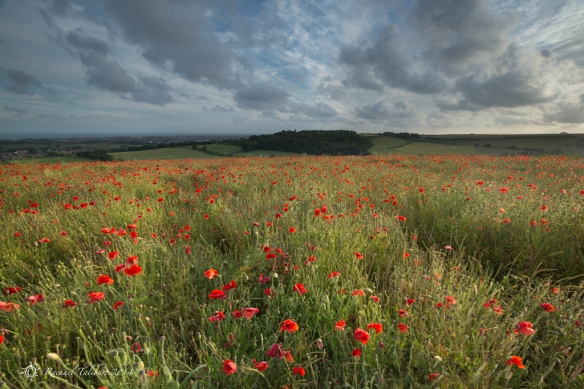 Mad Patsy said, he said to me,
That every morning he could see
An angel walking on the sky;
Across the sunny skies of morn
He threw great handfuls far and nigh
Of poppy seed among the corn;
And then, he said, the angels run
To see the poppies in the sun.

A poppy is a devil weed,
I said to him – he disagreed;
He said the devil had no hand
In spreading flowers tall and fair
Through corn and rye and meadow land,
by garth and barrow everywhere:
The devil has not any flower,
But only money in his power.

And then he stretched out in the sun
And rolled upon his back for fun:
He kicked his legs and roared for joy
Because the sun was shining down:
He said he was a little boy
And would not work for any clown:
He ran and laughed behind a bee,
And danced for very ecstasy.

– James Stephens In the poppy field

Some may remember that last June I found a wild poppy field nearby and went a bit mad photographing it.  As is the nature of natural poppy fields, it is not there this year, the land having been rotated back to crops.   However, thanks to the photographers’ network, I have found another, rather further afield but, as last night’s visit confirmed, completely worth the trip. More to follow!

Poppy field near Send, in Surrey.

In July, I shared some images of a poppy field I had found near the village of Send. I couldn’t resist sharing a few more. It was really special being there, among all the flowers. Three whole fields were covered in poppies. The first shot was taken in the morning, but I popped down again in the evening for some better light. 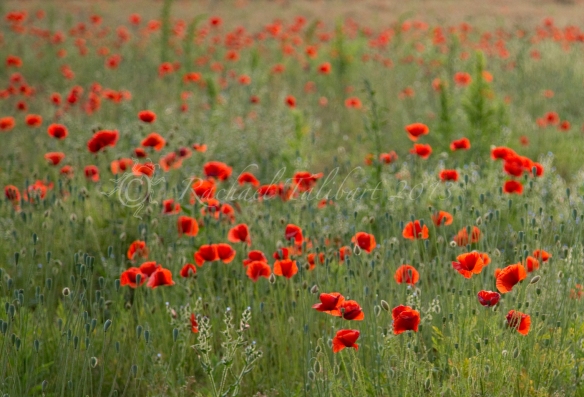 Poppies mixed with other wildflowers and grasses

As the sun set, the poppies began to close, but the light was more interesting.

Everything changes in evening light

In low light like this, a tripod was essential. Needless to say, the camera was not set up for a moving deer, so when one bounded across the field I was working in, all I could do was react and take the shot with the wrong settings. At least I have something vaguely deer-like to jog my memory; I have a picture in there that needs no settings.

Through the dancing poppies stole
A breeze most softly lulling to my soul.

A field in the heart of Surrey.