Time to catch up on my ‘project 365 redux’. This image is from 11th January 2009.  It is the Magna Carta memorial at Runnymede.  This year marks the 800th anniversary of the signing of Magna Carta, at Runnymede, on 15 June 1215.  Originally an attempt to settle the disputes between King John and his barons, Magna Carta has, over the centuries and through many reissues, renewals and reimaginings, become a symbol of liberty. Lord Denning described it as “the greatest constitutional document of all times – the foundation of the freedom of the individual against the arbitrary authority of the despot” (Wikipedia). 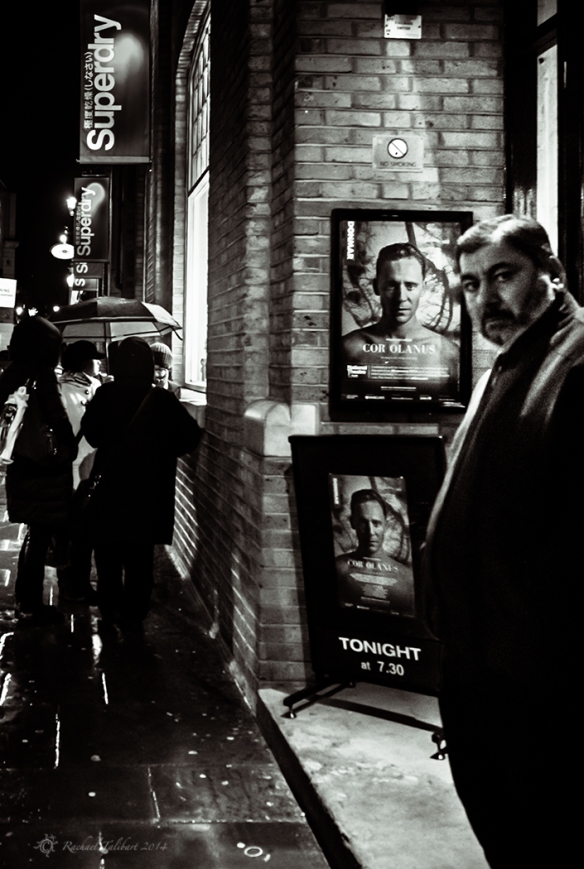 This image, from 10th January 2014, called ‘I, Coriolanus’, was captured in London’s Seven Dials area. It is in the tradition of street photography, a genre with conventions that include ‘blur, over-exposure, unwanted elements [that] intrude upon the scene [I could add noise and under-exposure]’ (Inigo Taylor, Black and White Photography magazine, Jan 2015).  The poster is for the Donmar Warehouse’s production of Shakespeare’s Coriolanus, with Tom Hiddleston in the title role, directed by Josie Rourke.

The image seemed an appropriate companion for the Magna Carta picture. Shakespeare’s tragedy (1605-8) is based on the life of Caius Marcius Coriolanus, a Roman general turned politician who, after being deposed, schemes to exert his own will upon Rome. He rails against the idea of allowing plebeians to have a say in politics and leads an assault against Rome.  Ultimately, he is persuaded to sign a peace treaty.  However, like the despotic King John, his alliances become his burden; he is murdered by conspirators from within.

King John died in 1216.  Most historical accounts give the cause as dysentery contracted while on campaign against the barons (the first agreement of Magna Carta having been dishonoured by both sides).  However, in another Shakespeare play, King John, he is poisoned by a monk within his own cortege.

The plots of not only Shakespeare’s histories but also his tragedies often came from history books of his time, most notably Holinshed’s Chronicles.  They are history redux. Thus the link with my very much more humble 365 redux was impossible to ignore!

I am currently working on a presentation that I have agreed to give at a group exhibition in Lyme Regis later this month.  The topic is the coast.  I thought I might share ideas here as I go. I have always had an ambivalent relationship with the sea.  I was brought up in a seafaring family and a large chunk of the first eleven years of my life was spent at sea.   Unfortunately, I never got over my chronic sea sickness.  Without wanting to labour the point, this meant that I spent quite a lot of time staring over the side of the boat!  I have found the sea’s motion fascinating ever since (but I still prefer to observe it from the shore).

The image of eternity.’ 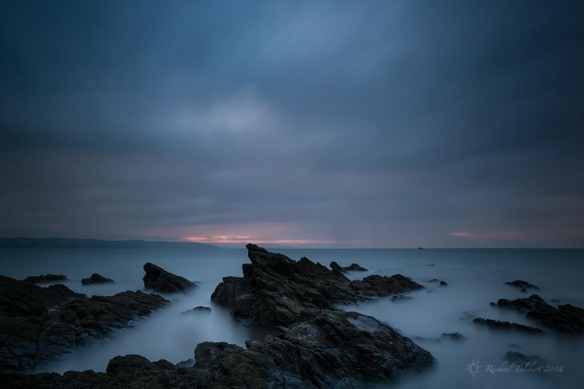 In a rash moment I recently signed up for WordPress’s Writing 101.  Writing, on a photography blog?  Yes, I did wonder if I knew what I was doing.   I suppose I wanted to get back to why I started this blog in the first place.  It wasn’t just to share photographs; I had Flickr and 500px for that.  When I started Focused Moments, back in April 2012, I was in the middle of my MA. Perhaps the blog was a way of creating my own original(ish) content when I was otherwise immersed in other people’s words.   (As my subject was Victorian Literature, there were a great many words!)

Over time, however, Focused Moments inexorably tended towards a photo-a-day kind of blog.  Before more touchy readers protest, I am not suggesting for a moment that there is anything wrong with that sort of blog, just that it’s not what I intended.  With Writing 101, which began yesterday, there are daily prompts.  The first one was to free write for 20 minutes.  Well, I didn’t feel like free writing about photography.   That prompt seems, to me, more appropriate to the creation of fiction.  So I have taken comfort in the challenge’s statement that we can be as free as we like in our interpretation of each prompt, and I have ignored it completely!  Instead, I have thought about beginnings.

It must be fairly obvious to anyone who is kind enough to stop by here from time to time that I like landscape photography.  For me, setting up somewhere and waiting for the light is a beautiful, and healing experience.   But I am not really a morning person, so most of my imagery is made at the end of the day.   However, last Friday Pete and I managed to get up for dawn.  At this time of year and at these latitudes, that is no mean feat.  Our alarms went off at 4am, and I can tell you that, as we were blearily dressing and mainlining caffeine, the planned adventure suddenly seemed far less appealing.

Once we were outside, however, all that changed.  There wasn’t much of a sunrise, but it didn’t matter.  We had the beach to ourselves.  A hush hung over the morning, broken only by the swoosh of the waves and the haunting cry of oyster catchers.   Homer’s ‘rosy fingered dawn’ delicately coloured the sky as a solitary fishing smack chugged out of the bay.  I could understand why many landscape photographers prefer this subtle time of day to the more spectacular sunset.   As my children grow, and need me less, one small but significant compensation is that opportunities to get out for daybreak will grow.  The beginning of a new phase in life will involve seeing more of the beginning of each new day. There’s a certain poetry in that. 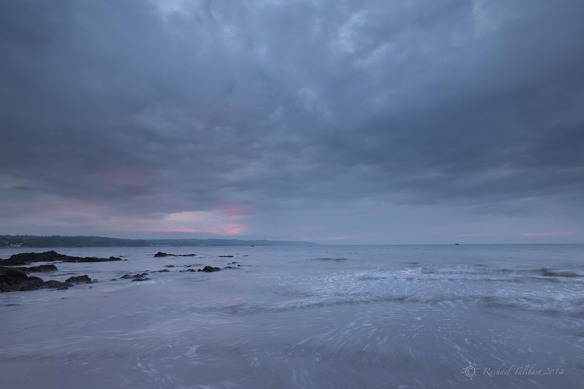 To have made a beginning is half of the business.

The child of the morning, rosy-fingered dawn, appeared.

I see the waves upon the shore,
Like light dissolved in star showers, thrown…
-Percy Bysshe Shelley (1818) 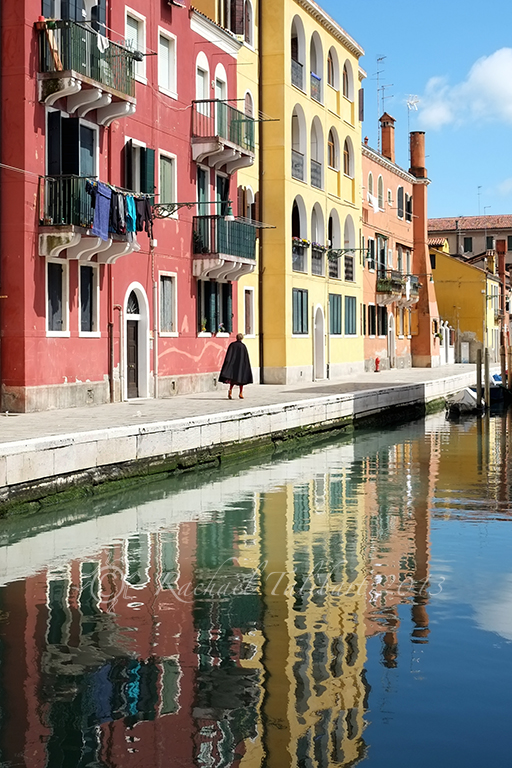 This image was captured in the Ghetto of Venice, an sequestered spot within the city that allows the visitor to escape the crowds thronging the main pathways and alleys. It is an atmospheric place and, of course, has an interesting history, which I will soon explore in another post. Until then, I leave you with Shylock’s famous speech from The Merchant of Venice:

William Shakespeare, The Merchant of Venice, Act III, scene i.

This tiny spider has been hanging out in my olive tree for weeks now, happily oblivious to freezing temperatures and snow. It is a colourful and rather acrobatic addition to my garden.

And, for my next trick…

“Imperio!”
Moody jerked his wand, and the spider rose onto two of its hind legs and went into what was unmistakably a tap dance.
Everyone was laughing — everyone except Moody.
“Think it’s funny, do you?” he growled. “You’d like it, would you, if I did it to you?”
The laughter died away almost instantly.
― J.K. Rowling, Harry Potter and the Goblet of Fire

“Crepuscular rays are rays of sunlight that appear to radiate from a single point in the sky, specifically, where the sun is. These rays, which stream through gaps in clouds (particularly stratocumulus) or between other objects, are columns of sunlit air separated by darker cloud-shadowed regions. The name comes from their frequent occurrences during crepuscular hours (those around dawn and dusk), when the contrasts between light and dark are the most obvious. Crepuscular comes from the Latin word “crepusculum”, meaning twilight.”  – Wikipedia

Not surprisingly, perhaps, this spectacular meteorological phenomenon has often been connected with spiritual beliefs.  It is known colloquially as ‘Jacob’s Ladder’, referring to Jacob’s dream of seeing a ladder to heaven in Genesis.  The ‘ladder’ also has significance in Islam which revers Jacob as a prophet. It has inspired spiritual leaders of all faiths.

“God is the Sun and when His rays fall upon your heart, not impeded by the clouds of egoism, the lotus blooms and the petals unfold.” – Sri Sathya Sai Baba

The movie Jacob’s Ladder (1990) starring Tim Robbins tells the story of a vietnam veteran haunted by visions.  The story deals with questions about life and death, heaven and hell, and the film’s promotional poster shows a staircase spiralling out from Robbins’s face, like rays of sunlight.

Jacob’s Ladder is also a song written by Bruce and John Hornsby first recorded by Huey Lewis and the News.  In the song, a fan dancer rejects evangelism in favour of a step by step, one day at a time, progression through life: 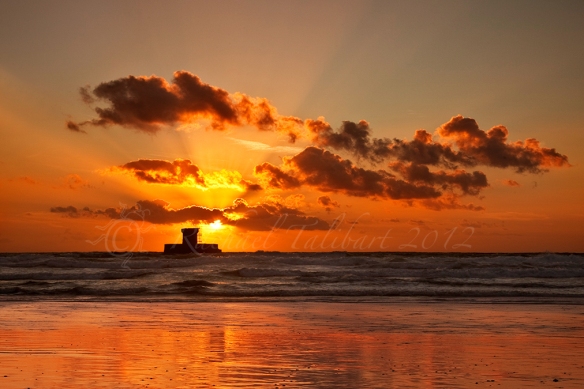 Yesterday, I shared an image I took on New Year’s Day at Dartmoor National Park.  Despite having lived in this country for most of my life, I am ashamed to say this was my first visit to the Park.  I will be back!

We hiked to two of the many rocky outcrops, known as ‘tors’, Haytor and Hound Tor, the latter thought to be the inspiration for Arthur Conan Doyle’s Sherlock Holmes adventure, The Hound of the Baskervilles.

I left my trusty Canon 5Diii at home and took instead the Sony NEX-7 I was testing.  A compact system camera packing a whopping 24 megapixel sensor, it is a fraction of the size and weight of my DSLR and made a far less demanding hiking companion.  But there are compromises, both in terms of ease of use and image quality.  Although you cannot see at this size, these images, all taken at ISO 400 are far noisier than my DSLR would have taken.  More tomorrow. 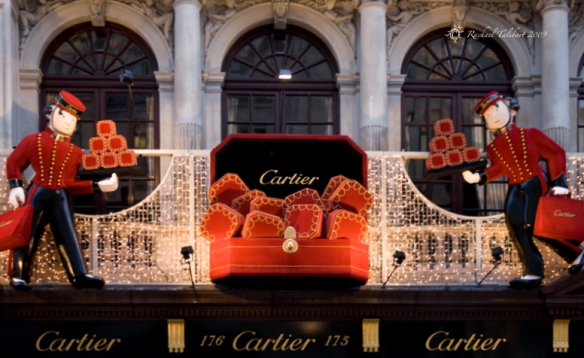 This post is a brief history of Christmas lights, chronology taken from Christmas: A Very Peculiar History by Fiona MacDonald.  Photos, as always, by me.

Edward H. Johnson, of Edison Electric Light Company, USA, was the first to decorate his tree with electric light bulbs, in 1882.

In 1904, Christmas lights were first used to decorate outdoor trees, but they were not yet electric.

In 1927, the first organised outdoor Christmas light displays were held in the USA, called ‘Festivals of Lights’.

Despite the relative safety of electric lights over their predecessors, the US Fire Prevention Authority reported that between 2003-7 fire-fighters were called out to around 250 Christmas tree fires every year. 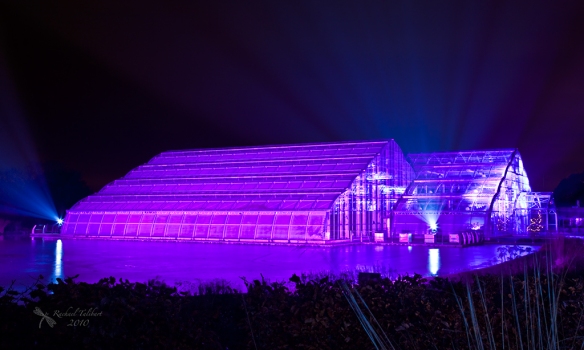 Christmas light displays have become ever more spectacular over the decades but, with concerns about global energy supplies growing, perhaps their days will soon be numbered? 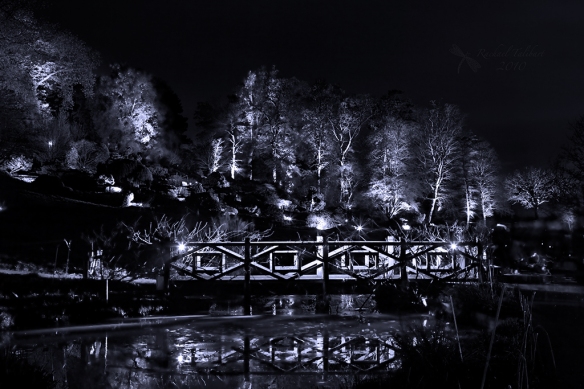 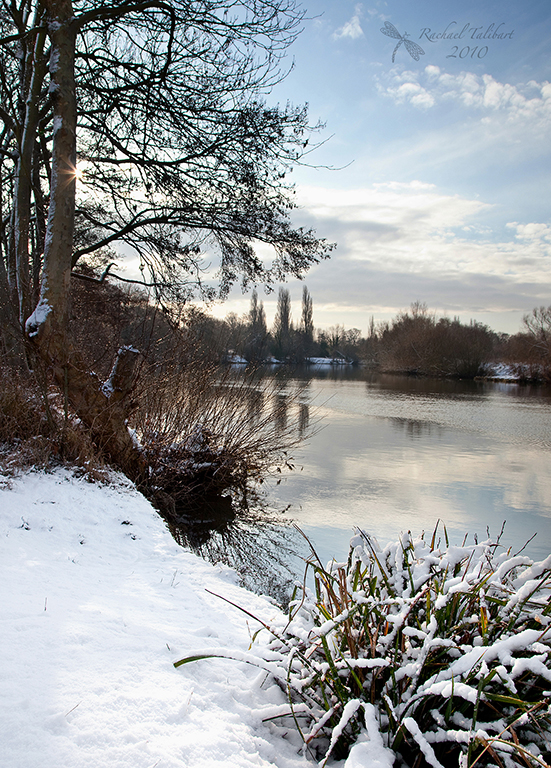 “I wonder if the snow loves the trees and fields, that it kisses them so gently? And then it covers them up snug, you know, with a white quilt; and perhaps it says “Go to sleep, darlings, till the summer comes again.”