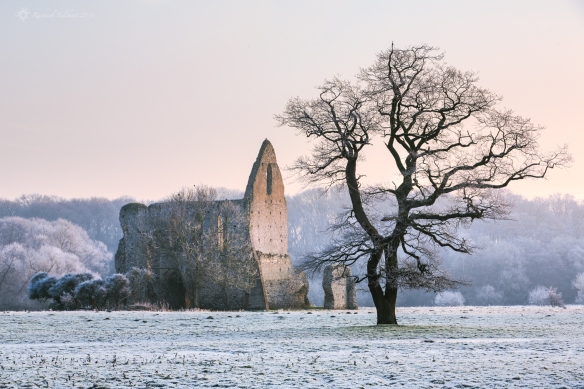 Yesterday morning, I had a chance to capture dawn over Newark Priory. It’s a shot I’d had in my mind for about 5 years and the conditions were perfect. For more about Newark Priory, see here.

Afterwards, I pottered about on the Wey Navigation towpath and collected some wintery shots.  I am writing a book about the Navigation and these shots should fit nicely. Altogether, a successful morning’s shooting. 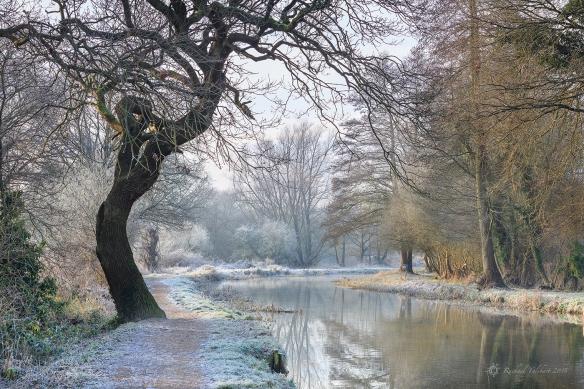 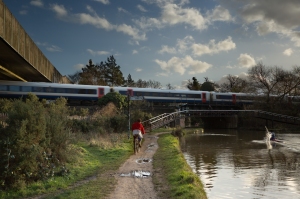 My 365/23 is from last year.  Three modes of transport, four if feet count (there’s a pedestrian on the footbridge).  Taken at the junction of the Wey Navigation and the Basingstoke Canal. For a fuller post about this shoot and the history of this location, click here. 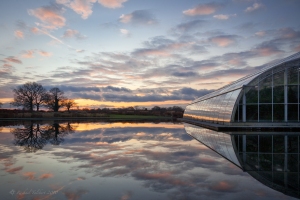 365/24 is from 2010, a brief moment of good light at the end of what had been a grey, uninspiring day.  This is the Millennium Glasshouse at RHS Wisley.

Recently I have started to retrace my steps along the Wey Navigation towpath with a view to getting some more up to date pictures for a possible book project.  Most of the Navigation runs through pretty countryside but there is one spot, between New Haw and Pyrford, where it runs close to, and is indeed crossed by, the M25, Britain’s busiest motorway.  It is not the most picturesque of landscapes but still full of interest for the photographer.  I enjoy the challenge of trying to make images here. 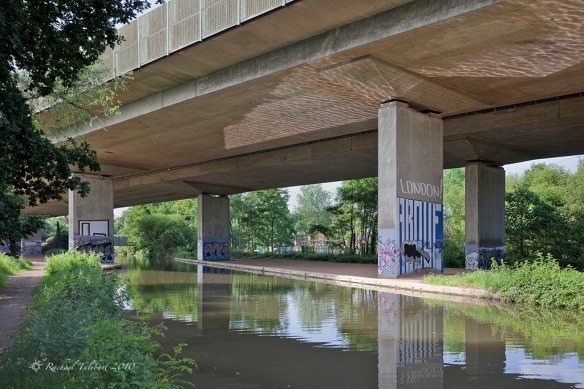 Although not conventionally beautiful, this is a very significant spot in the history of transport.  Here, within a few paces of its passage under the motorway, the Wey Navigation meets the Basingstoke Canal. The Navigation is not a canal strictly speaking but a river made navigable, and it predates the canal age by some hundred years.  Thus the Basingstoke Canal (opened in 1793) represents a later evolution of British transport, although it was never as successful as the Navigation and fell into disuse first. A sign here points to Thames Lock (3 miles), Guildford and Godalming (12 miles) and Greywell Tunnel (31 miles via the Basingstoke Canal). 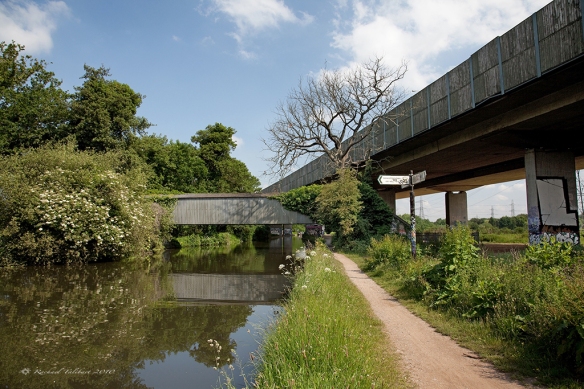 Immediately after its junction with the canal, the Navigation passes under a bridge that carries the main London to Southampton railway line (1838).  The railways of course were a further development and largely responsible for supplanting the canals as the principal means of goods transport. 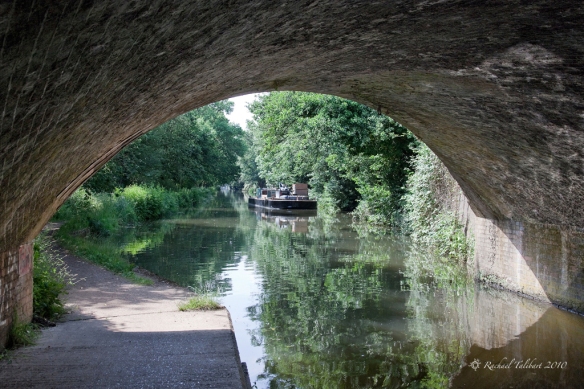 Then there’s the motorway, the next stage in the development of transport.  An iron footbridge next to the railway bridge adds a further layer, albeit rather older and more environmentally sound! 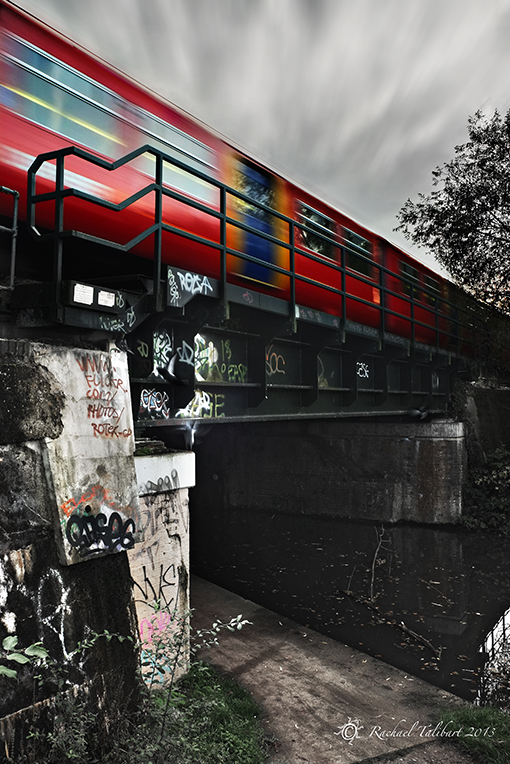 I have had a few funny looks from people during my visits here, and on a couple of occasions people have stopped to ask me what on earth I am photographing.  Yet, rather amusingly, I am clearly not the first photog to see potential in this location, although I don’t think I would ever go to such lengths to advertise my Flickr photo stream! 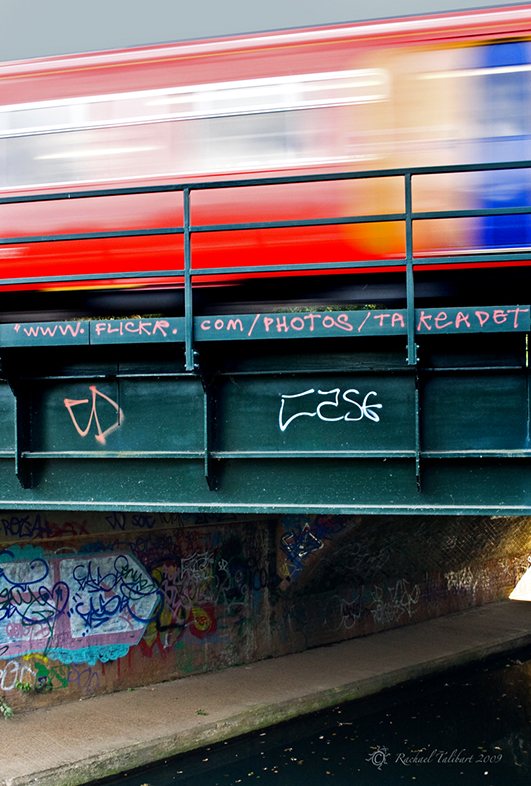 In some of my shots I have tried for a desaturated, moody look, to suit the industrial feel of the place. 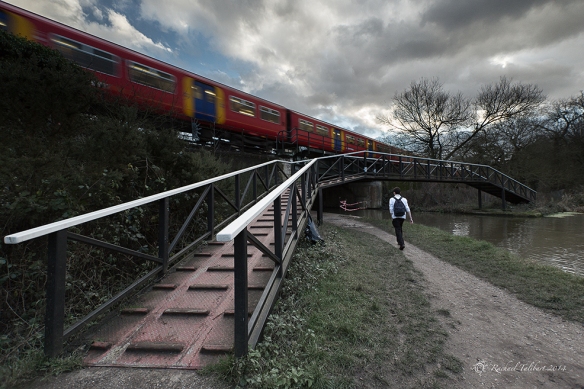 But sometimes I just can’t resist going for colour.  When the late afternoon sun peeps under the motorway, it almost looks pretty. 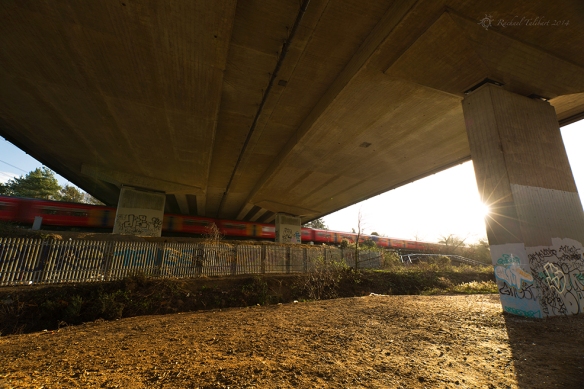 The next shot does not properly belong here as I took it at Weybridge Station, while waiting to meet my daughter.  But it was taken on the same afternoon as some of the earlier pictures, just a few minutes later, and it has got a train in it… 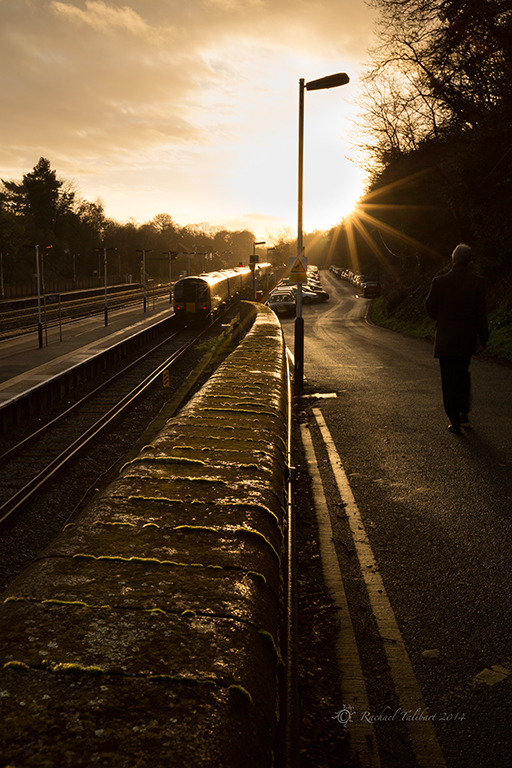 Of all the photographs I have taken here so far, strangely my favourite has no train.  I like the simplicity of the brick bridge against the sky. It seemed to demand a contrasty black and white conversion. 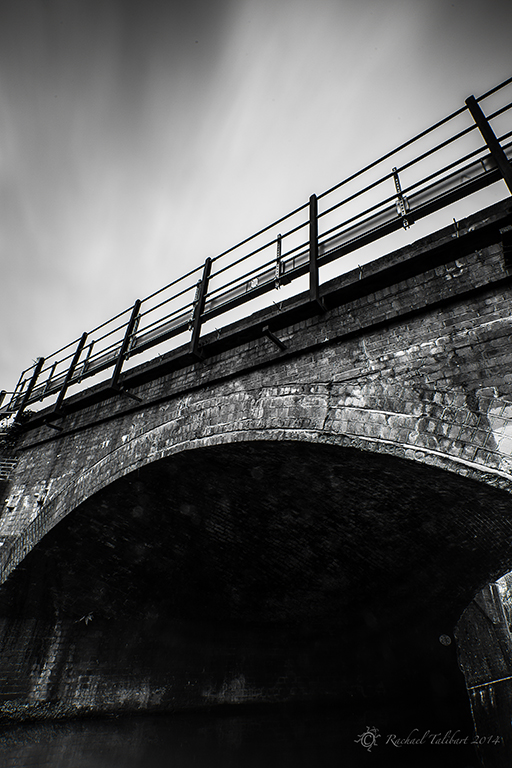