I promised a post about the Wey Navigation this weekend but ran out of time. So, a shortish post today and the Wey will have to wait until later in the week. I took this shot, scanned from a 6×4 print, in 1994. We were watching killer whales in the waters of Robson’s Bight, off the Eastern coast of Vancouver Island. We set off from Telegraph Cove, an atmospheric little settlement that has managed to retain much of its early 20th century character. The picture below, taken on the same trip appears inside and on the back cover of The Encyclopedia of Raincoast Place Names published by Harbour Publishing. Being something of a bookworm, I particularly like it when people buy my images for this purpose. I must confess to a few vanity moments when we were travelling in BC again in 2010 and kept finding the book in shops. 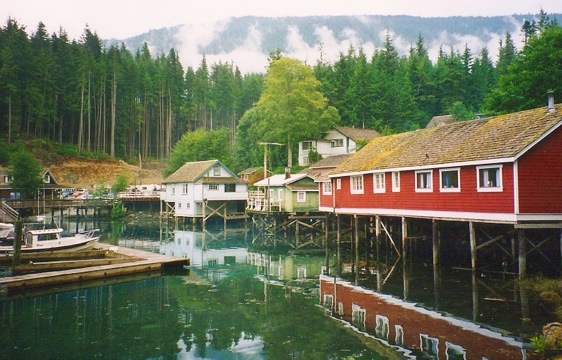 Yesterday’s post was about storytelling in a sequence of images. Today’s is about a one-image story. I call this picture ‘Escape’. To the viewer, it tells of a whale that escapes the whaler’s harpoon. It suggests a backstory, the hunt that has failed, and a future story: where is the whaler going, will it be back, and will the whale escape next time?
The original exposure is below. It tells its own tale to me, of a whale watching trip out of Monterey in summer 2008. It was hardy whale watching. By the time the whales appeared, I was one of only a few left on deck. The heavy grey mist never lifted but, when a tall ship ghosted past in the distance, I had my shot. However, it needed some work back at home to ‘age’ the shot in keeping with the historical fiction I wanted to tell. First, I moved the ship further along the horizon to make a more balanced composition and to make it clearer that the ship was disappearing into the distance. I converted the image to black and white and added a sepia tint. Then I added a texture and, finally, did some selective dodging and burning. The original was an unremarkable shot but a little editing turned it into an storytelling image worth keeping.