Autumn is a season of transition and, this year, that has held true for me both professionally and personally. In August, my youngest child came back from a 5-week summer school at Berklee College of Music in Boston transformed into an independent young lady.  I see an empty nest yawning, especially as she wants to study in Boston when she’s 18.  It will be a challenge for me; we’re very close and she hasn’t given me any of the teenage trouble that might make one welcome a respite. Thank goodness there’s an opportunity here too and I’ve seized the extra time now available to further my photography business. I do feel very lucky at this stage of my life (not exactly Autumn yet, but certainly late Summer), when friends are starting to talk about retirement plans, to feel as though I am embarking on something new. 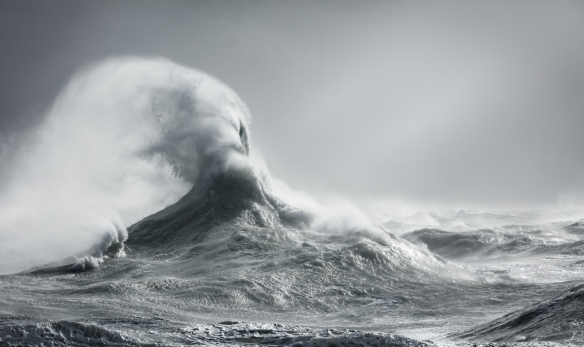 Storm Brian, in October, showed me that my Sirens portfolio was not finished.

Autumn and Spring are my ‘workshops seasons’ and, this Autumn, I’ve run more workshops than ever, including two new ones. I’m just back from my inaugural Creative Abstracts and Details workshops. Two very enthusiastic groups enjoyed breaking photographic ‘rules’ as they explored their creativity at the coast. Driving home last night, and musing on the transitional nature of things generally, I felt energised by the willingness of both groups to embrace experimentation and risk-taking in their photography. In fact, it’s a trend I’ve noticed across all my workshops this Autumn. There’s been a lot of talk this year about repetition and sameness in landscape photography but among my clients I’d say, if anything, the opposite is true. Reviewing the morning’s images over lunch on both days, I was struck by how very individual each photographer’s interpretations were. I hope this trend, if it is a trend, continues. It’s so refreshing.

A painterly wave top captured at one of the locations of my Creative Abstracts and Details workshop, but not while leading!

There are three more workshops next week and then a break until the new year but that time will fill up fast as print orders are increasing in the run up to the festive season. It doesn’t hurt print sales that one of my photographs, Perigee, was printed in the Sunday Times Magazine again last month in connection with the Landscape Photographer of the Year competition. Perigee is the titular image in a series of abstract rust details. It’s certainly a change from my Sirens, and a much warmer palette, as you’d expect with rust! I’m enjoying printing Perigee on Platinum Etching paper, a lovely matte, textured paper with a warm base manufactured by Fotospeed. 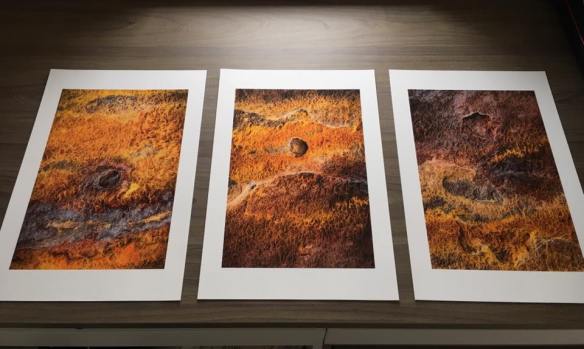 Hot off the printer, Perigee triptych.

Another big development this Autumn was the announcement that I am starting to lead residential photography workshops for Ocean Capture. I want my existing business, f11 Workshops, to stay true to its successful day-workshops format so it makes sense to run the residential workshops under the banner of Ocean Capture. It’s a very successful international business run by well-known, fine art, ocean photographer, Jonathan Chritchley and an obvious fit with my photography. I’ve never been very good at having a ‘boss’, so it’s important to be working with someone I can trust to let me run my workshops my way. I’ve known Jonathan for several years and when he invited me to join Ocean Capture, it wasn’t a difficult decision. My first Ocean Capture workshops, called ‘Tides and Tempests’, will run in March and November 2018, in Sussex, and availability is already down to last places. Plans are afoot for more far-flung locations, but it’s too soon to say anything more about those, for now…

Fingers crossed for weather like this on my Tides and Tempests workshops.

As I write this, I’m looking forward to the opening night of the Landscape Photographer of the Year exhibition at Waterloo, on Monday 20th November. I’m lucky enough to be receiving an award again this year and I’m really pleased that several of my friends will be there celebrating their own successes too. The exhibition will run into early February on the mezzanine level inside the station. It’s free and well worth visiting. It seems fitting to me that my photograph, Fire Within, winner of the Classic View category, the Lee Filters Prize and two judges’ commendations, was taken at one of my closest and favourite beaches, Birling Gap. The rapidly eroding chalk-cliff coast of East Sussex is about as transitional as you can get and access to the beach at Birling Gap has been closed for the last 6 weeks while the steps are moved back.  The beach reopens next month, just when I am on a break from workshops, so I know where I’m going to be hanging out with my camera in December. If you’re down there and see a rather wind-blown ‘tog’ in a funny hat, do come over and say hello.

Fire Within, drama at Birling Gap.

“But when fall comes, kicking summer out on its treacherous ass as it always does one day sometime after the midpoint of September, it stays awhile like an old friend that you have missed. It settles in the way an old friend will settle into your favorite chair and take out his pipe and light it and then fill the afternoon with stories of places he has been and things he has done since last he saw you.”
― Stephen King, ‘Salem’s Lot