I am still going through my files from Friday’s epic dawn shoot. I have enough to keep me going for quite a while. I hope this top one conveys something of the post-dawn tranquility I experienced on the banks of the Wey Navigation between Newark and Ripley.

This second image was actually taken much later in the same day, nearer to sunset. The frost was mostly gone but there was a subtle hint of mist in the distance. I was attracted to the way the grass was catching the light; the crow on the fence was the icing on the cake. I just had time for one exposure before it flew away.

By complete contrast, my 365/26 is from this day in 2009. I had gone into Guildford with a friend, to do some shopping. My camera was an encumbrance I could have done without but the demands of 365 made me bring it, albeit reluctantly. I snapped these tulips, and it really is a snap. But, when I shared it on Flickr, it caught Getty’s eye and became one of the first images in my stock portfolio. 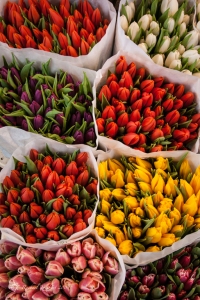 As I promised only to post images never before shared, or to re-edit old ones, I have added a light vignette to this and some extra clarity. Cheating? Maybe, but it’s the only file I could find!

3 thoughts on “The morning that just keeps giving”