Welcome to the second instalment of my three-part series on the aphid, ant, ladybird relationship. If you don’t like ants, look away now!

Less than .5% of the world’s species of ant live in the UK. It is mostly too cold and wet for them, something not difficult to believe given the spring we’re having! By far the most common is the black garden ant, Lasius Niger.

These tough, fast, little ants live in colonies of up to 15,000. They eat insects, seeds, nectar and even the bodies of their own dead. 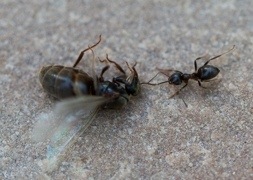 As illustrated in an earlier post, they have a particular liking for the sticky honeydew secreted by aphids and will climb bushes to “herd” aphids, protecting them from predators. They obtain the honeydew by stroking the aphids with their feelers!

On certain still, warm days each summer, males and queens will emerge from the nest and take to the wing, mating in flight. The queens then shed their wings and start new nests. The males, their sole purpose fulfilled (if they are lucky), die. Environmental cues lead to all the nests in a locality releasing their males and queens at the same time. This enables inter-nest mating, ensuring genetic diversity. 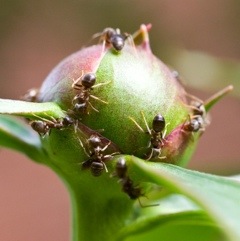 The study of ants is called myrmecology. This made me think of Achilles’ myrmidons so I looked up the etymology of the word and learned my new thing for the day! According to myth, Zeus made the Myrmidons from a nest of ants. Another meaning of myrmidon is a faithful follower who carries out orders without question.

“Next time you’re found, with your chin on the ground,
There’s a lot to be learned, so look around.

10 thoughts on “The little bug that could”