A story in photographs.
(If you don’t like bugs you may want to look away now!)

I took this image in my garden last summer. It is part of a story I told with my camera on Flickr over a few days. Here’s the whole thing:

Some species of ant ‘milk’ aphids by stroking them with their antennae. This encourages the aphids to secrete a sticky substance known as honeydew which the ants eat. Here an ant is caught in the act of doing just that. The ants tend their aphid herds like shepherds, protecting them from predators. 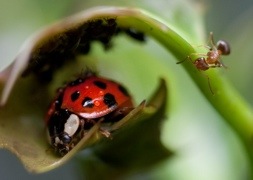 The next day a visitor has appeared. A hungry ladybird (ladybug to my American friends) can think of nothing better than this ready-prepared banquet of its favourite food, aphids. An angry ant-shepherd glares at this wolf in the fold.

A day later and the voracious ladybird is still laying siege to aphid city. The ant shepherd has brought in reinforcements but to no avail. The ladybird is like a Sherman tank and angry looks just aren’t going to work. If you look closely you can see an aphid’s legs sticking out of the ladybird’s mouth. 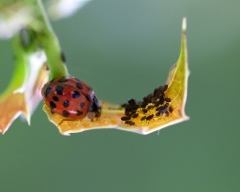 Another day later and the shepherds appear to have given up and left their flock to their fate. However, that is not the end of the story. The next day, there was no sign of the ladybird and the ants were back tending their flock as if nothing had ever happened.

Of course, really one should not anthropomorphise animals, but sometimes it is just too tempting.

20 thoughts on “The shepherds and the wolf”